If there were ever a pudding that embodied the phrase ‘don’t judge a book by it’s cover’ then this is it. I am well aware that it looks like something that was left in the oven for about an hour longer than it should have been. Or perhaps some sort of scorched post-apocalyptic landscape. Or the aftermath of a volcanic disaster. But no! It’s a delicious chocolate dessert.

The inspiration for this recipe came in a tiny booklet I was given about 20 years ago when I first became vegetarian. I ignored most of the savoury recipes and lived off carbs, cheese and peas for the next 5 years or so, but the one recipe I often returned to was this all-in-one chocolate pudding. It was vegan, provided you used soya milk, and the chocolate sponge was cooked together with a chocolate sauce to create a dark and decadent treat. The recipe has been lost, found and adapted over the years, and the booklet is long gone so I don’t know who the original author is to credit them, but I hope they would be glad that their recipe has brought my family a lot of joy, and a lot of post-dinner naps due to over-eating, for many years.

In the original recipe, I remember the sponge being reasonably dense but moistened by the sauce, which creates pockets and pools of liquid throughout. This made me wonder if it would work with non-wheat flours, which often create a cake with a slightly heavier texture, and seeing as wheat flour is almost impossible to get hold of at the moment, due to the lock-down, it seemed as good a time as any to try (you can of course use plain white flour if you have it).

As someone who generally finds recipes a bit restrictive, I love a bit of experimentation, which means I am also no stranger to calamitous kitchen failures. But this makes it all the more satisfying when you give something a go and it works. Better than you expected. First time round.

One of the challenges when using gluten-free or grain-free flour is that the resulting texture can be very different. Some flours, such as rice flour, can have a very grainy texture in cakes, whereas others can be very dense; chickpea flour for example. And due to the lack of gluten, other means are needed to bind the ingredients together (hence why gluten-free recipes are often reliant on using vast numbers of eggs).

A really great way to lighten the texture and give your baking more of a crumb is to use ground almonds. These aren’t cheap, but you often don’t need a large amount – substituting a small proportion, maybe a quarter or a third, of the flour with ground almonds can do wonders for the texture of a bake and needn’t break the bank. In this recipe I also use a ‘flax egg’ which can be a great alternative to the more traditional ‘egg’ for binding. All you need is a tablespoon of ground flax seeds (also known as linseeds) and three tablespoons of liquid – I used two of water and one of oil to add a little extra moisture. You can use chia seeds in the same way. Just mix in a small bowl, leave for 5-10 mins, and once the mixture has turned gloopy it’s ready to use.

One of my favourite flours at the moment (because I am the sort of person who has favourite flours) is buckwheat. Despite the name, buckwheat is a seed and therefore both gluten and grain free. It’s very nutritious and has a lovely nutty flavour. You’ll find it in larger supermarkets, health food shops or online, or you can grind raw buckwheat groats in a high speed blender or spice grinder to make your own flour. It’s often used to make pancakes or galettes, as well as breads and porridge, and is particularly common in Eastern Europe and Russia. And, as it turns out, buckwheat flour works incredibly well in hideous chocolate puddings!

The process for making this pud is pretty simple. As with most vegan cake recipes it’s best to measure out the wet and dry ingredients separately. If you make the flax egg first, you can leave it to gloopify while you measure out the other ingredients, then add it to the wet ingredients before combining it all together. You’ll have a very thick batter which you’ll need to spread over the bottom of a deep, greased, oven-proof dish (a casserole dish is perfect – don’t even think about using something with a loose-bottom). Measure out and mix together the cocoa power and sugar for the sauce, sprinkle over the batter in a thick, even layer, then pour boiling water over the top. Carefully place in the oven and cook for about 40 minutes.

The only thing that is difficult about this pudding is knowing when it’s done – the usual ‘stick a knife in and see if it comes out clean’ isn’t ideal when you have a sauce and pudding in one. Given the pudding’s looks, you are unlikely to ruin the aesthetic by poking around a bit more: try to identify a spongy bit near the middle, stick a knife in and pull aside slightly to see if it looks cooked. The sauce is much darker than the batter so as a general rule, if it’s lighter and still gloopy then it needs a bit longer. If you only have dark gloop then congratulations! You have yourself a chocolate pud.

Eat straight away, smothered in soya or oat cream, or vegan vanilla ice cream. I would also highly recommend an elasticated waistband and an easily-accessible sofa or bed for the recovery. 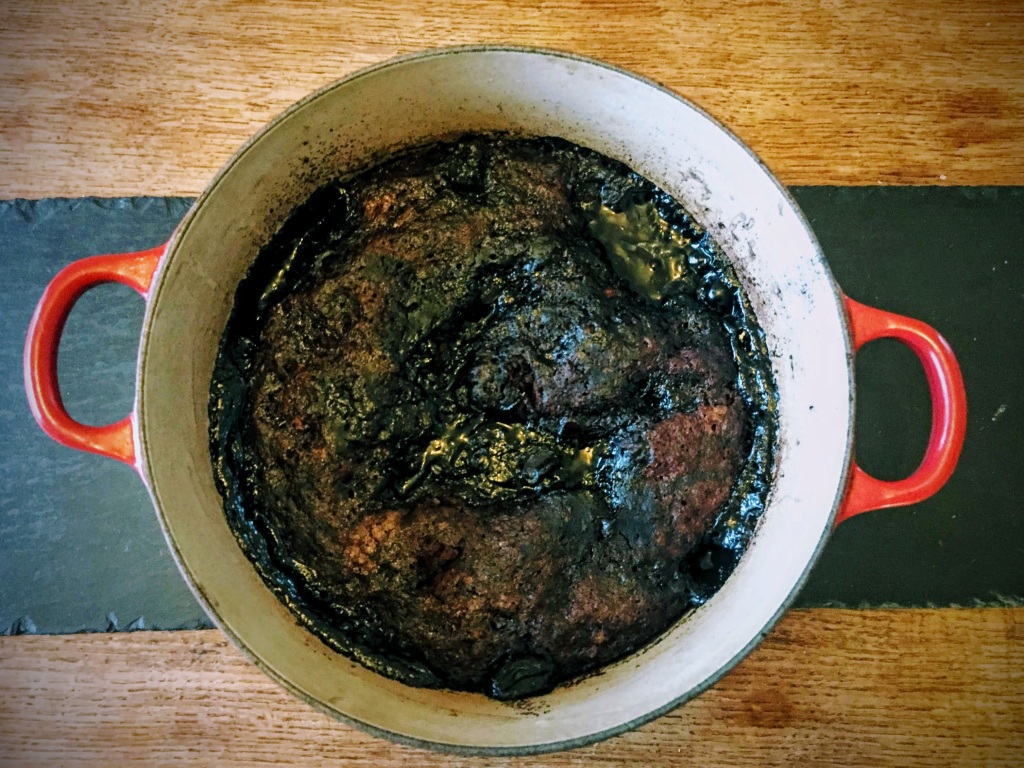 *If you are using plain flour, you’ll achieve a spongy texture without the almonds, although you can always add them in for a bit of extra lightness (i.e. 50g ground almonds and 180g plain flour). I haven’t tried this recipe with all-buckwheat flour and no ground almonds, but I imagine the texture would be much denser and it’s likely to have a more pronounced buckwheat flavour. If you’re feeling adventurous, give it a try and let me know how it goes!