I am aware that it is a bold move to describe a brownie as ‘ultimate’, given the abundance of brownie recipes on the internet. However, if your idea of the ultimate brownie is intensely chocolately, satisfyingly fudgy, deeply indulgent, and that bizarre combination of incredibly rich but irresistibly moreish, then this is the recipe for you. Not only is it vegan, but there are gluten-free and grain-free options which are pretty much unclockable, and I should know as I have tried them all, and also fed them to very fussy children (shout-out to my gorgeous but very fussy cousins, Zoë and Flora).

I have tried many vegan brownie recipes, from all ends of the spectrum. There are the ‘healthy’ brownies, often made with beans, other pulses, or vegetables. These can be really tasty but aren’t quite sweet enough reach the heights of indulgence I am after; sometimes the vegetable or beany taste comes through and often the texture can be a little off. I’ve definitely made a few recipes that would make lovely cakes but are not brownies in my book – if it’s not fudgy and compacted in the centre, it’s not a brownie. I’ve tried some that have lacked the depth of chocolate flavour, or been unbearably sweet, and others that have been dry and claggy to eat. I have made brownies that have tasted divine, but would probably be more properly categorized as fudge, given their density.

So here is my attempt to add something to the brownie cannon. Whilst in my mind, this recipe solves all of these problems, I am willing to admit that different brownies may cater to different tastes. Indeed, the ultimate brownie may not exist at all…

How To Make The Ultimate Chocolate Brownie

Traditional brownie recipes, and especially gluten-free adaptions, tend to rely heavily on eggs. For this recipe, I use apple sauce as the main egg replacer – this helps bind everything together and adds a lovely moistness. In some recipes, fruit puree can make the finished a little too heavy, but for brownies it’s ideal. You can buy jars of smooth apple sauce in supermarkets, but it’s really easy to make. Just peel and finely chop whatever apples you have, put them in a saucepan with a dash of water and simmer with the lid on for 20 mins. For cooking apples I add a tablespoon or two of sugar to counteract the tartness. Leave to cool and then whizz until smooth in a food processor or blender. Use it straight away, or freeze in 50g portions. There’s an abundance of apples this time of year so I make a lot of apple sauce and freeze it for any future urgent brownie requirements.

Instead of apple sauce, you could also used boiled and mashed sweet potato, or mashed banana (although the banana flavour does come through). To your puree, add the rest of the wet ingredients; non-dairy milk, melted vegan butter (I use Naturli Vegan Block but any vegan spread will do), oil, vanilla essence, and caster sugar.

In a separate large mixing bowl, add the flour, ground almonds (if using), cocoa powder, baking powder, and salt. The choice of flour is really up to you. I have tried this recipe with a standard gluten-free plain flour mix, and with buckwheat flour for a grain-free option, and both have worked really well. I can’t see any reason why it wouldn’t work with other sorts of flour such as rice, spelt, or barley. The reason I have added ground almonds is that they help lighten the texture of the brownie, and mimic a wheat-flour crumb. Particularly when using non-wheat flour, ground almonds prevent your brownie from turning out too heavy and dense. I like the little bit of added lightness they bring with wheat flour as well, but they are just a good with all-wheat flour for a nut-free option.

Before everything gets mixed together, make sure your oven is at temperature, your tin or dish is greased and lined with baking paper, and that your chocolate is roughly chopped. If you are wondering why I have included chopped chocolate but not nuts, the answer is that I find nuts a slightly jarring interruption to my enjoyment of what I believe should be an overwhelmingly chocolatey experience. However, if you are a fan of a chopped walnut or pecan in your brownie, there is not reason why you can’t substitute some of the chopped chocolate for chopped nuts instead.

Once you have everything ready and assembled, pour your liquid mixture into your dry ingredients and stir vigorously until everything is incorporated, then stir in the chopped chocolate. Scrape the thick batter into your prepared tin, and bake for 35–40 minutes. The skewer test is a bit hopeless with brownies as a clean skewer normally means your brownies are overcooked. I shake the tin, or dish, and if the entire thing wobbles, it needs longer. If it’s stable around the edges and only wobbling in the centre, then it’s done. I found that it took a little longer with buckwheat flour, more like 40–45 minutes, but with the wobble test you can’t go too far wrong. Plus, even if your batter is completely raw in the middle, it’s vegan and will still taste delicious even if you do need a spoon.

Leave in the tin for 10–15 minutes, then turn out onto a cooling wrack. They will be much easier to slice when they are completely cool, but are so good when warm that I don’t suggest you wait that long.

I hope you give these a try! Please let me know how you get on – any feedback is really appreciated. You can comment below or find me on Twitter or Instagram @greedybearbakes. 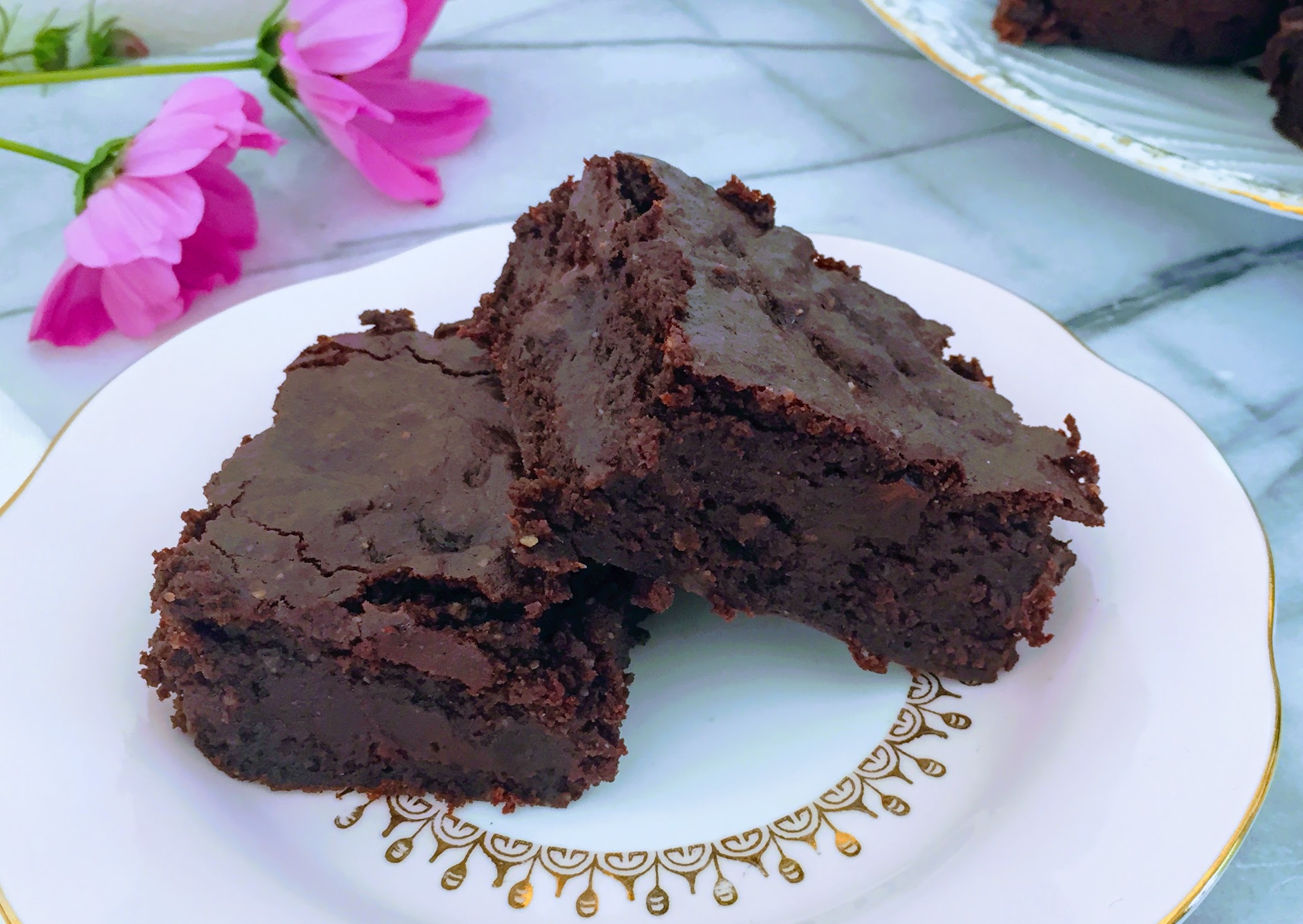 *Instead of apple puree you could use boiled and mashed sweet potato, or mashed banana, however the banana flavour does come through.

**I like to add a little butter for the flavour but you could omit this and use 175ml oil, or use 175g melted vegan butter or spread.

***I have made this recipe with plain wheat flour, a gluten-free flour mix, and buckwheat flour, and all have worked really well. I don’t see why other flours such as spelt, rye, or barley wouldn’t also work, but each behaves slightly differently. Let me know if you give them a try!

****Ground almonds are important when using gluten-free flours to add some texture, however if you’re using wheat flour then you can omit the almonds and use 200g flour instead, for a nut-free option.