Chewy, crispy and meaty roasted jackfruit, bursting with flavour from a punchy tamarind marinade. Soya sauce and chilli paste add some deeply savoury notes, with tangy and sour tamarind, balanced with brown sugar, which facilitates optimum charring and caramelization in a hot oven. Perfect in wraps, bao, dumplings, sandwiches, on top of burgers, or how ever else you fancy!

Jackfruit is a strange and wonderful plant that was hardly heard of in the UK until very recently, despite being a common ingredient in South Asian cuisine. As a ripe fruit it is used in sweet dishes and desserts, but it’s the meaty, flakey texture of the young jackfruit (sometimes called young green jackfruit), that has made it so popular as a meat substitute over here. It can been eaten straight out of the tin, or cooked in curries, but it is really wonderful as a slightly chewy and flaky pulled pork alternative. Similarly to tofu, the marinade really makes it, and due to it’s mild flavour, jackfruit can handle some pretty punchy and powerful ingredients.

I came up with this recipe as a filling for steamed dumplings, but have since used it liberally for other things because it is SO GOOD. I’d made some attempts at jackfruit before and never been entirely happy with the results – either the texture was a bit off or the depth or balance of flavours wasn’t quite right. The main problem that I had with this version is trying not to eat all of it before I could use it as a filling. Which is not a bad problem to have.

The key to really excellent pulled jackfruit is cooking it twice; first on the hob so it can soak up all of the tasty flavours of the marinade, and then in the oven so that you get some lovely crispy, charred corners on the fruit. Roasting it also dries the jackfruit out a little and gives a less sloppy and more chewy texture – ideal for things like bao and wraps where there is a high risk of filling sploodging out.

This recipe is not complicated but due to the cooking requirements it does take a little time. If you want to use it in steamed buns you’ll also need to factor in cooling time.

How to make tamarind pulled jackfruit

To begin, prepare the onions, garlic, ginger and chilli (dice, mince and slice respectively) and drain the jackfruit. Often the core or outer edge of the jackfruit is a little tougher than the flaky petals, so cut any of these tough sections away from your jackfruit chunks, and finely slice them. You can leave the sections of petals whole as these will flake and fall apart while cooking.

Warm a saucepan over a medium heat with a little oil, then add the onions once hot. Fry for about 10 minutes, stirring occasionally, until they’re soft and starting to brown, then add the garlic, ginger and chilli and stir for a couple of minutes.

While the onions are frying, make up some vegetable stock and gather the rest of the ingredients; tamarind paste, soya sauce (tamari for gluten-free or coconut aminos for soya-free), soft light brown sugar (or caster, coconut sugar or palm sugar), and chilli paste. Once the garlic, ginger and chilli has had its two minutes, add the stock to the pan, followed by the rest of the ingredients, including the jackfruit. Bring to the boil, then simmer over a medium-low heat with a lid on for 20 minutes.

Tamarind paste can vary in strength quite considerably so be cautious! As a general rule, the darker the colour, the more concentrated the paste. I initially used a mid-brown coloured paste and needed two generous tablespoons, and another time I used a paste that was almost black in colour and ended up with jackfruit that was a bit too sour and tangy – a tablespoon of that probably would have done the trick. Similarly with the chilli paste; use what you have but adjust it to suit your taste. I really like using Gochujang, a korean read pepper paste. It’s savoury and very spicy, but not overwhelmingly so, however it often contains wheat so won’t be suitable for everyone. When making a completely gluten-free version I substituted sriracha, as I didn’t have any other paste, and that worked well.

After 20 minutes of simmering, the jackfruit will has soaked up some of the tasty broth, but the mixture will still be quite runny. Remove the lid, turn up the heat to medium, and cook until the liquid has reduced down. This should only take about 10 minutes – you don’t want the mixture to be completely dry, but reduced enough that when you give it a stir, you can still see the bottom of the pan afterwards, as in the second picture. Once it’s at this stage, spread the jackfruit in a thin, even layer on a non-stick baking tray, and put in a hot oven (about 200C) for 15 minutes. Remove from the oven and stir the jackfruit, which should be starting to char a little, then return to the oven for another 5-10 minutes, depending on how juicy or charred you want the resulting mixture to be.

I went for a full 25 minute roasting and it came out something like this:

These jackfruit chunks were still beautifully succulent and moist, but there’s no longer any liquid. All of that juice has been absorbed by, and cooked down with, the jackfruit so you are left with crispy, chewy, flaky fronds that are bursting with flavour.

How to use your tamarind pulled jackfruit

There are so many ways you can use this! Here are a few ideas for inspiration, but let me know in the comments below if you can think of others!

Or (and this is what I’m doing next time) make double quantities so you can try a few of these out!

Please let me know if you give this recipe a try! I’d love to hear how you get on, and any feedback is really appreciated. You can comment below or find me on instagram and twitter @greedybearbakes. 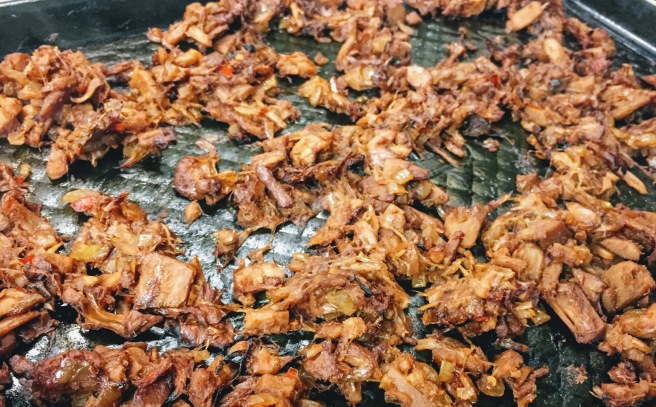 *Tamarind paste can vary considerably in strength so it’s best to taste before adding the full 2 tbsp. Paler pastes tend to be less concentrated, whereas if your paste is almost black then you may only need 1 tbsp. You can always taste and add a little more right before it goes in the oven.

**Any chilli paste will do or even chilli sauce. You can add more or less depending on how spicy you want your jackfruit, but I prefer restraining the heat and adding chilli sauce afterwards if the mood takes me. I like using gochujang (korean red pepper paste) but be mindful if you have a gluten intolerance as this often contains wheat.