These little tarts are an absolute delight; rich, smooth and sweet custard encased in tender, flaky pastry, for a few bites of heaven. These are surprisingly easy to make, and even easier to eat – perfect as a sweet treat with a cup of tea, and an ideal provision for picnics.

Years ago, when I was at university, I spent a long weekend in Portugal, and in the space of about four days became thoroughly addicted to these little tarts. I would slip in to every bakery I passed (and there were a lot of bakeries), and savour every mouthful of buttery, flaky pastry and smooth, sumptuous baked custard.

Since turning vegan, these have long been on my list of goodies to attempt to veganize. The results are really quite wonderful, and for surprisingly little effort. I use store-bought puff pastry (Jus Rol and some supermarket versions are vegan) and Jus Rol now do a gluten-free puff pastry that’s also suitable for vegans. The custard is made from non-dairy milk, thickened with corn flour, infused with cinnamon, lemon peel and vanilla, and with coconut cream for added richness.

The key consideration with baked custard, is how to ensure that it doesn’t completely boil over the pastry case. I am not adverse to a rustic looking tart, but if you’ve ever tried cleaning burnt on vegan custard from a baking tin then this is probably something you will want to avoid experiencing again. The trick seems to be to ensure that the custard is completely cool before adding it to the pasty cases, and not to over-fill them.

Now given the absence of eggs or butter, this is clearly not a traditional pastel recipe, and is in fact considerably more simple. However one step from the classic method that I wanted to retain was infusing the milk before making the custard. So to start, in a small pan, add the non-dairy milk (a richer milk such as Oatly whole, barista-style milks, or soya milk is best), along with the caster sugar, a cinnamon stick, the vanilla extract, and two strips of lemon peel. I use a vegetable peeler to scrape two thick strips from the entire length of the lemon. Heat until steaming, but not boiling, then set aside to infuse for 10 minutes or so.

In the meantime, gather the other ingredients. Measure the corn flour into a small bowl with a dash of milk, and mix to a smooth paste. Open a tin of coconut milk and scoop out the solid cream from the top (in warmer weather, put the tin in the fridge for an hour beforehand) until you have 100g. You can use the rest as a lighter coconut milk in curries or smoothies.

Once the milk has had 10 minutes, scoop out the cinnamon stick and lemon peel. Place over a medium heat, add a pinch of turmeric for colour, and whisk in the corn flour slurry. Bring to the boil, whisking continuously, until the mixture has thickened, remove from the heat once bubbles have started to appear, then whisk in the coconut cream. Scrape the custard into another bowl to cool, or place the base saucepan in a larger bowl of cold water. You can put a piece of cling-film directly on top of the custard to prevent a skin forming.

While the custard is cooling, pre-heat the oven to 220C fan, grease a 12-hole cupcake tray, and take the pastry from the fridge. If you have the sort that’s a block rather than a roll, use around 300g, and roll it out to a rectangle measuring approximately 20×30 cm. Otherwise unroll you pastry, then roll it up tightly from the short end (i.e. the 20cm end if you’ve rolled it out yourself), and use a little water to stick down the edge. Trim the ends of your roll, then cut it into 12 even pieces. Turn each piece on its side and roll it out so you have a disc slightly larger that the holes in your tray, then place it in a hole. Use your thumb to press the pastry into the base and then up the sides. You want the base to be a little thinner than the pastry at the sides, and the sides should come just above the edges of the hole. You can use a little water to stick down any flaps of pastry that aren’t adhering together.

Hopefully by now, your custard should be cool, otherwise place the pastry cases in the fridge until the custard is ready. Then spoon the custard into each case until it comes about three quarters of the way up the sides of the pastry. Any more and it’s liable to bubble over. Bake for 16-18 mins.

In bakeries, pasteis de nata are baked in an extremely hot oven, which gives them the characteristic blackened patches on top. In the absence of an industrial oven, just before the tarts are ready, turn your oven grill on its highest setting, then once the tarts are done, move them so they are just under the grill for 1–3 mins. Watch them diligently as they can burn very quickly.

Remove and allow to cool in the tin for 5 minutes. If the custard has boiled over a little, use a knife or spoon to separate any areas where the tarts have stuck to the tray while the custard is still hot. Carefully remove the tarts from the tin using a spoon, and place on a wire rack to cool.

These are at their absolute best when still a little warm, but will last a couple of days in an airtight container. They are a perfect picnic treat – there’s no need for plates or cutlery, they are not liable to melt, and are small and tempting enough to pop in your mouth before you’ve even realised that you couldn’t possibly fit any more in. 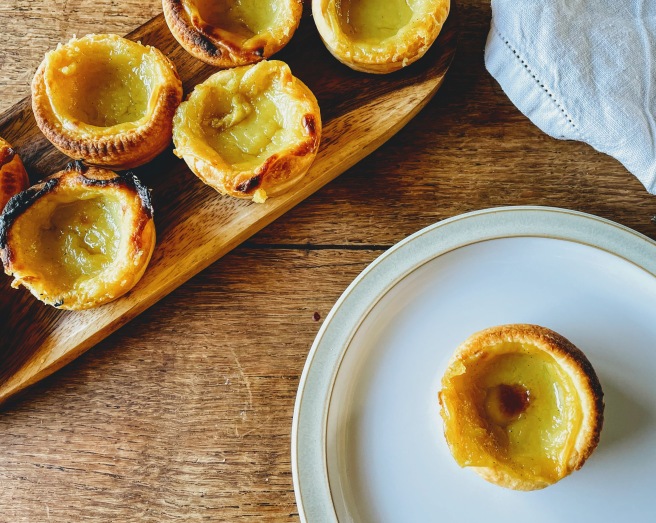 *If the weather is cool, or your coconut milk is stored in a cool place, the cream will likely have already floated to the top of the tin. If the weather is warmer or you are unsure, pop it in the fridge for at least an hour before you open it.